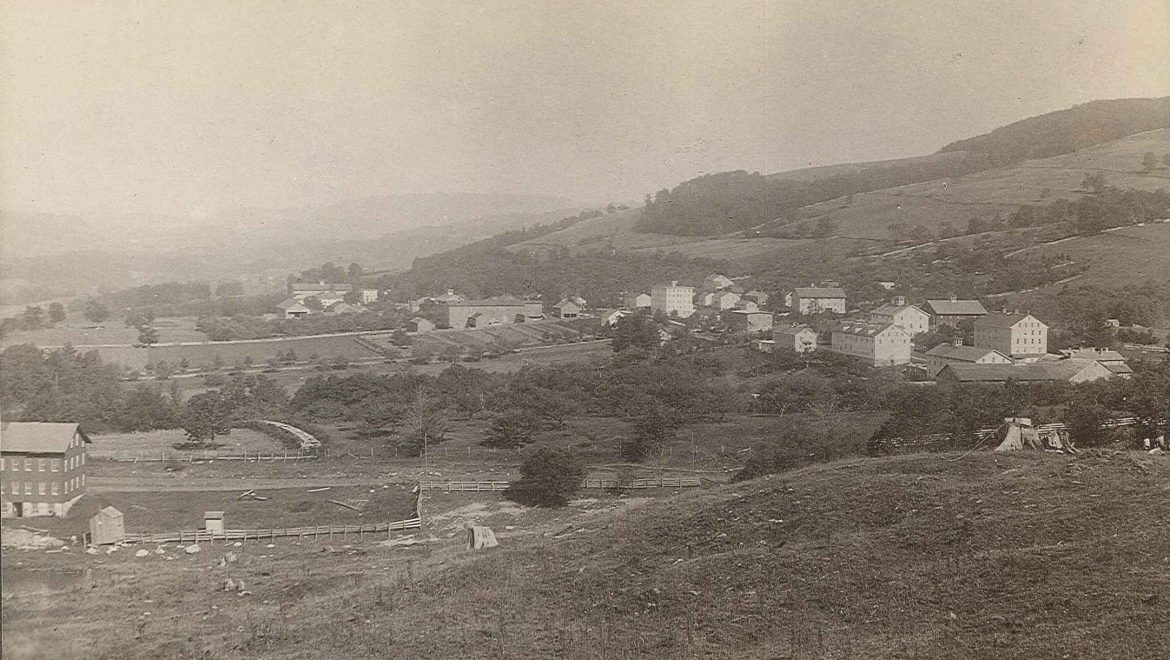 This view of the Mount Lebanon community shows what the view from the “Pinacle” may have been. Shaker Museum | Mount Lebanon 1957.8547.1

Meeting on the Mountain

In a Mount Lebanon Church Family journal, Eldress Polly Reed describes a special worship meeting that took place on August 19, 1856 at the “Pinacle,” and wrote a poem to commemorate what she describes as a “glorious feast.” Eldress Polly was an accomplished artist, credited with creating more than fifty of the spiritually inspired works […]

In a Mount Lebanon Church Family journal, Eldress Polly Reed describes a special worship meeting that took place on August 19, 1856 at the “Pinacle,” and wrote a poem to commemorate what she describes as a “glorious feast.”

Eldress Polly was an accomplished artist, credited with creating more than fifty of the spiritually inspired works known as gift drawings.

She also had exceptionally graceful handwriting, a skill that served her well first as a teacher at the Mount Lebanon school, where she made several rewards of merit given to students for good behavior and hand-drawn maps for the classroom. As a member of the Ministry from 1868 until her death in 1881, she frequently acted as copyist for Ministry circulars and other writings. As the Elder Sister, or leading elder for the sisterhood, she kept a journal that recorded the daily events and activities of the family from 1855 until 1864, in which she described this special occasion.

The meeting on the mountain was held in honor of a group of Shakers visiting from Union Village, Ohio. Members of the Shaker ministry traveled extensively, particularly the parent ministry at Mount Lebanon, which was tasked with governing the whole of the Society. Elsewhere in the journal Eldress Polly noted, “Elder Amos Stewart & Sister Betsy Bates set out this morning on a journey to Canterbury from thence to Alfred & Gloucester. Their object in going is to help the Canterbury Ministry establish some new regulations among the leading part at Alfred & Gloucester, they being in a very broken condition which makes members in as bad or worse state.” Trustees, charged with conducting business transactions, also traveled frequently, though their work entailed interacting more with members of the world than other Shakers. Deacons and deaconesses, responsible for the management of Shaker industries and other concerns of daily living, visited other communities to learn about equipment and methods they might take home; Eldress Polly noted a visit by Elder Hervey Eads, who was tasked with selecting sewing machines for the sisters of the Western communities, and a trip by Elder Freegift Wells of nearby Watervliet, NY, to examine the Mount Lebanon Church Family’s tape loom. However, the purpose of the Ohio Shakers’ journey is not clear. They may simply have come to forge bonds of union with fellow Believers, as they also visited the communities at Watervliet, New York, Hancock, and Tyringham, Massachusetts. As Elder Daniel Offord wrote in 1891, “Let the visiting go on; it keeps our union growing, without which we are poor creatures.”

According to Eldress Polly, on August 19 at 9 AM, a group of twenty-seven Shakers went to “a cleared spot on the South Mountain, called the Pinacle, where can be seen the whole of Shaker Village and the Adjoining Country.” This location is most likely now the site of the Abode of the Message, and possibly the Abode’s Sanctuary at the Mountain Retreat Center. If so, it is a site that continues to foster fulfilling spiritual experiences.

At the pinnacle, the Shakers sang, danced, marched, and enjoyed the blessings of “many good spirits of sisters and brothers.” Eldress Polly declared in the poem, “Our meeting was one of the best.” They also enjoyed treats of “Sugar, Candies & hazel nuts.” They stayed for about two and a half hours, and at the end of the meeting, Eldress Polly concludes,

We felt that the ties of love union & blessing

Were strengthen’d by what had been done,

We sung a farewell then retir’d from the mountain,

And turned our faces towards home.

The complete poem, in which Polly names each of the participants and gives a detailed description of the day, is below.

Short sketch of a pleasant walk with some Western friends to a cleared spot on the South Mountain, called the Pinacle, where can be seen the whole of Shaker Village & the Adjoining Country. New Lebanon, August 19th, 1856.

The nineteenth of August we long shall remember,

For something uncommon took place;

The like is not known, no such thing is recorded,

In history it cannot be traced.

A beautiful band from the state of Ohio,

While visiting here in the East,

With a band from New Lebanon went on the mountain,

And there had a glorious feast.

It was good Ashbel Kitchel, a true hearted brother,

Daniel Serring a man of the Lord,

These names we with pleasure record.

The Sister Lovina so simple & pleasant,

Does make out the number complete

Of that lovely band from the State of Ohio,

Whose spirits with love are replete.

And now with much pleasure I’ll carefully mention

The names of all those who did go,

With our friends to that beautiful spot on the mountain,

To view the nice valley below.

Who ministers freedom and power,

And Abigail Crosman the same,

And dear Anna Williams who cleard up the pathway,

The third Elder sister we name.

And still there is another whose name we shall mention,

Who stands beside her in the ranks.

Were there & the valley did view.

With music delighted our ears,

Ascended the hill without fears.

In every good gift were agreed,

And now every one I believe I have mention’d

We had a good meeting no bondage no straightness

No doubting our peace did molest,

Our meeting was one of the best.

We feasted on love & the good word of Mother,

Who met with us there on the hill;

and many good spirits of sisters & brothers,

Their blessing on us did distil.

Of temporal blessings we too had a portion,

Which gladden’d each one in our ranks,

For which every one returned thanks.

We felt that the ties of love union & blessing

Were strengthen’d by what had been done,

We sung a farewell then retir’d from the mountain,

And turned our faces towards home.