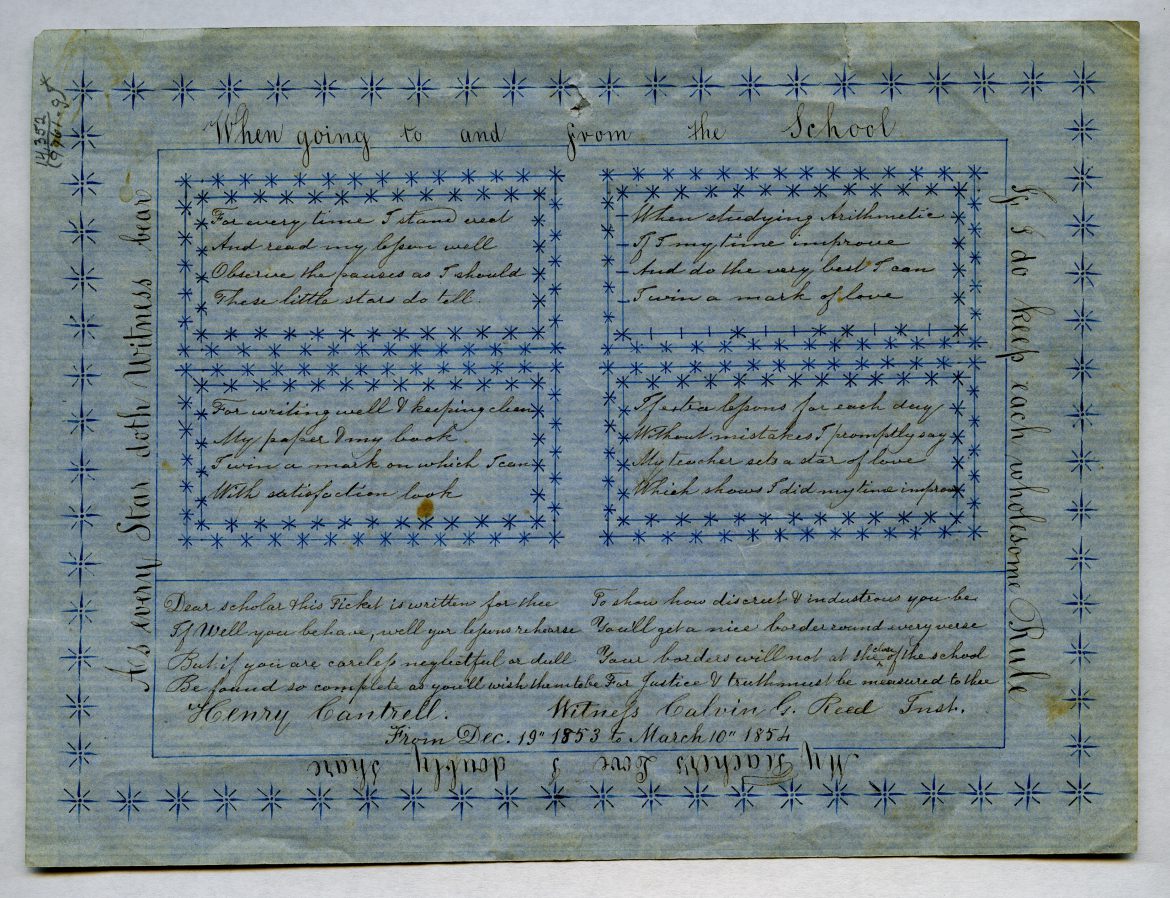 Eldress Polly Jane (Ann) Reed produced in little more than a decade beginning in 1843, more gift drawings in the forms of sheets, heart cutouts, leaf cutouts, and circular cutouts than any other scribe who recorded the spiritual gifts received during the Shakers’ Era of Manifestation. More than fifty of her works from this period are still extant. Eldress Polly was an […]

Eldress Polly Jane (Ann) Reed produced in little more than a decade beginning in 1843, more gift drawings in the forms of sheets, heart cutouts, leaf cutouts, and circular cutouts than any other scribe who recorded the spiritual gifts received during the Shakers’ Era of Manifestation. More than fifty of her works from this period are still extant. Eldress Polly was an extraordinary Shaker. In 1825, when Mount Lebanon Elder Calvin Green, on a missionary journey, visited her parents’ home in Fairfield, New York, eight-year-old Polly decided that she wanted to go home with him. Her parents sent her off with the elder when he promised to be as a father to her and to make sure she would be well cared for. Polly was also known for her skill in stitchery and penmanship. In her obituary, she was remembered as “a woman of most excellent and ingenious faculties; a finished scholar; a beautiful speaker, and a most lovable associate.” In 1855, Polly was called to serve as the First Order Elder Sister in the Church Family and in 1868 until her death in 1881 she was a member of the Lebanon Ministry.

Prior to her call to serve in the Shaker leadership, Polly was one of the teachers for the girls’ school. During these years she produced these three rewards of merit for the young scholars in the school. While two of the rewards in the collection of Shaker Museum | Mount Lebanon were created for young girls, the third one was for Henry Cantrell. Since Shaker boys and girls went to school at different times of year – the boys, with male teachers in the winter, and girls, with female teachers in the spring and summer – it appears that Polly prepared these rewards for the boys’ school as well as for the girls she taught.

Eldress Polly’s last known gift drawing is dated April 8, 1854. These rewards of merit date from 1854 and seem a natural continuation of the artful skill she expressed in those earlier drawings. Eldress Polly is not known to have signed her gift drawings and the attribution of the body of her work is based on one documented drawing and the distinct similarity of handwriting and decorative elements to all the other drawings. Two elements – an eight-pointed star and a border decoration that looks something like a four-legged lizard from above – appear on a number of her drawings as well as on these rewards of merit.

The rewards of merit, unlike many that were presented to students in the outside world at the completion of some education or behavioral goal, were living documents. They seem to start out as relatively undecorated documents – with borders of either spaced dots or hatched lines – and as the scholars satisfied certain requirements the dots and the hatches were completed by Polly by making the dots into her distinctive eight-pointed stars, or in the case of Sylvina Clyne’s reward the space between the dotted border was filled in with the four-legged lizards figures. Edress Polly explains how the rewards work in verse:

“Dear scholar this ticket is written you see
To show how discreet and industrious you be;
If well you behave, well your lessons rehearse,
You’ll get a nice border round every verse;
But should you prove forward neglectful or dull,
Your borders will show it by not being full.
Then strive day by day to observe every rule,
That you may have joy at the close of the school.”

“When going to and from the School
If I do keep each wholesome Rule
My teacher’s Love I doubly Share
As every Star doth Witness bear.”

While the three rewards in the Shaker Museum | Mount Lebanon collection share similar sentiments, they vary in design and complexity. Henry Cantrell, at 14 years of age, in his final year of school, was given the most developed reward. Each of his subjects and points of deportment are presented in four-line verses. The rectangular star-bordered box for spelling contains the verse: “These little stars do plainly show, How many spelling words I know. For every ten I spell complete, A little star I freely get.” His reward has his name recorded as well as having been witnessed by Elder Calvin G. Reed, his instructor.

Martha Jane Flandro’s reward includes rectangular hatch-line-bordered boxes with simply the words, “Spelling, Reading, Writing, Geography, Arithmetic, and Studying Silently.”  Additional rectangles on the back side are labeled, “For standing Erect in my rank” and “For keeping my eyes on my book.” Martha Jane’s  life with the Shakers is a bit of a mystery. She may have been an orphan brought to the North Family Shakers in 1852 when she was between ten and 12 years old and left the Shakers the month after her reward of merit was prepared. This may explain the relatively undecorated borders on her reward. Sylvina Clyne, like Martha Jane, has a rather short life with the Shakers. She came to live with the Shakers in 1852 at age seven or eight and was gone by 1857 having been moved around from family to family in that relatively short time. This unsettled Shaker life may also explain the sparse borders on her reward. Her reward is the only one of the three on which Eldress Polly employed the “lizard-shaped” decoration between the border dots.

All in all, these rewards, in addition to providing an interesting finale to Eldress Polly Reed’s work as a scribe during the Era of Manifestations, show the tremendous care taken and effort made by Shaker teachers in courting the love and respect of their students and in rewarding their students successful learning and appropriate deportment.

Of course, as always, the Museum would like to know if more of Eldress Polly’s rewards exist in other collections.

One response to “Rewards of merit for young Shaker pupils”