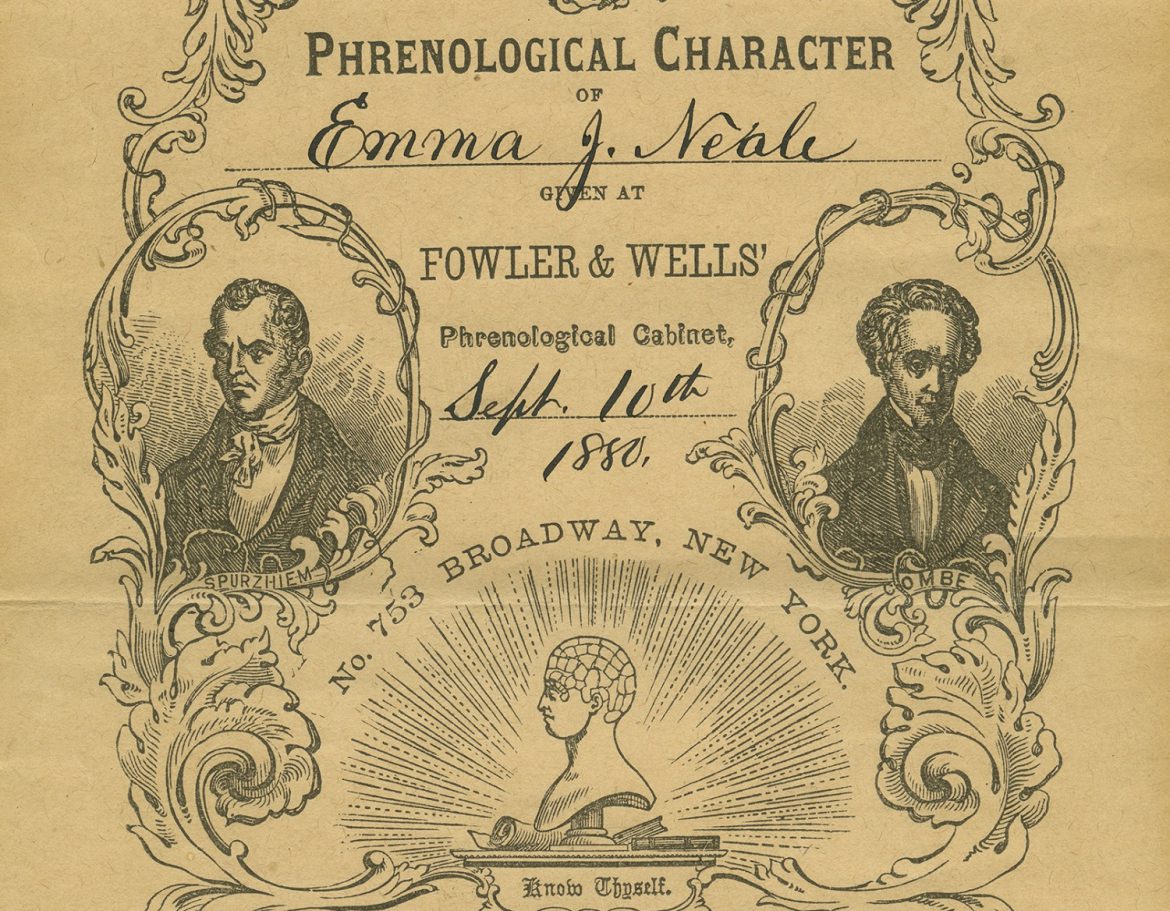 In September of 1880, a typed, ten-page report on the personality and characteristics of Sister Emma J. Neale was prepared in which she was described as “a remarkable critic.” The report was based on a phrenological examination, or reading, performed by Nelson Sizer at the Fowler & Wells Phrenological Cabinet in New York City.

In September of 1880, a typed, ten-page report on the personality and characteristics of Sister Emma J. Neale was prepared in which she was described as “a remarkable critic.” The report was based on a phrenological examination, or reading, performed by Nelson Sizer at the Fowler & Wells Phrenological Cabinet in New York City.

Conceived circa 1800 by Austrian physician Franz Joseph Gall, phrenology purportedly measured a person’s abilities and character attributes according to the size and shape of different areas of the person’s skull. But, Sizer wrote in 1893, “[I]t is not bumpology, and never has been.” Phrenology was based on the idea that different regions of the brain were the source of different attributes such as combativeness, friendship, and self-esteem. These regions were identified and diagrammed as seen in this illustration from the back cover of Sister Emma’s reading.

For a time phrenology was enormously popular in the U.S., in part due to brothers Lorenzo and Orson Fowler, who wrote and lectured, published extensively, and performed readings.  The practitioners of phrenology were, of course, wrong about personality attributes being measurable on the skull. Phrenologists were correct, however, in asserting that different parts of the brain govern different aspects of thought and behavior, and that the brain’s physiology plays a role, though not in the way that they thought. Phrenology has been discredited, but it helped give rise to psychology and neuroscience as practiced today.

Why Sister Emma Neale had a phrenology reading performed is not clear. However, the Shakers kept abreast of trends in the outside world; plaster busts sold by Fowler & Wells were owned by Shakers at Hancock and Mount Lebanon.

One reason for the Shakers’ interest in phrenology may have been that its practitioners argued that it was an avenue to self-improvement, even perfection, a pursuit central to Shaker beliefs. In Self-Culture and Perfection of Character, published in 1847, Orson Fowler argued, “It will show all how to guide and regulate their feelings and conduct; how to restrain and subdue their ‘easily besetting sins’; improve their moral characters… and thereby render their actions always virtuous, so as thus to secure that one end of their being – happiness.” Another possibility is that Nelson Sizer was a relative of brothers Charles, Daniel and Frederick Sizer, who were all Shakers, though that is as yet unproven.

Sister Emma J. Neale (1847-1943) came to live at Mount Lebanon at age 8, and remained for the rest of her life. She became a trustee, or business manager, for the Mount Lebanon community in 1901, and ran the profitable cloak industry, rescuing the Church Family from financial straits. She then became trustee for the whole society, and tried to sustain the Shakers’ fortunes during the difficult early decades of the 20th century.

Her phrenology reading, though performed decades earlier, highlights some of the traits that would serve her, and the Shaker society, well. In his report, Nelson Sizer noted, “Your desire for gain is not strong,” and “You have order enough to last you all your days.” He also stated that she is sharp-tongued, and hard on others as well as herself. He concluded, “You are not half as happy as you would be if you were not half so good – so do not try to be quite so good,” and advised, “You ought to associate with people who are joyous, and… mellow… they would tend to soften and modify your sensitive criticism and self crimination.”