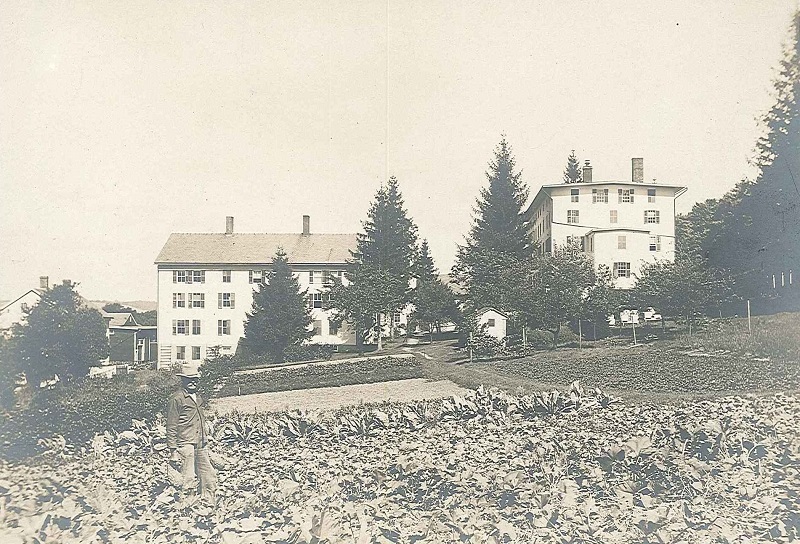 “O! How very warm”: The Shakers in summer

During these warm and occasionally sultry days of July and August, one might ask, how did the Shakers cope with summer? Journals and a regular column, “Home Notes,” to which each community contributed for the Shaker-published periodical Manifesto, show that like all of us, they occasionally bemoaned the weather, but enjoyed the season as well. […]

During these warm and occasionally sultry days of July and August, one might ask, how did the Shakers cope with summer? Journals and a regular column, “Home Notes,” to which each community contributed for the Shaker-published periodical Manifesto, show that like all of us, they occasionally bemoaned the weather, but enjoyed the season as well.

A teacher at the Hancock community wrote in the Manifesto in 1890, “[O]ne day is much like another, as mine are spent in the school-room, which is -oh, so warm these summer days. Sometimes of an afternoon, when we can endure it no longer, we take our books and sit for an hour in the grove near by. The children learn quite as good lessons and enjoy it very much.” Sister Genevieve DeGraw of the South Family, Mount Lebanon, wrote in 1897 that, “July with its torrent of burning sun has come to stay till it goes. We are having a quiet celebration of Independence day by trying to keep cool.” The Shakers also remarked on the severe weather of summer. Sister Amelia J. Calver, writing from Mount Lebanon in 1892, commented, “The time is mostly employed trying to ‘keep cool,’ and dodge the so-called electric storms, of which we have such an abundance. The old-fashioned thunder-storm coming directly from the northwest, lasting about three quarters of an hour, then passing on leaving the air clear and cool, is a rarity. Now they come from every and any point in the heavens… and under such conditions they are like some people; they do not know when to take their leave, or say the last word.”

In journals from the same period, more frequent than complaints about hot or stormy weather were pleasurable accounts, especially of the fresh fruits of the season. The Mount Lebanon Shakers harvested strawberries, cherries, huckleberries, raspberries, blueberries, elder berries, and currants, and there are mentions of melons and pears as well. In 1895, Sister Cornelia French enthusiastically wrote,

“O! How very warm, every thing hastening to ripe perfection.”

Though the gathering of fruit occupied a great deal of time and labor, the Shakers often took the opportunity afforded by picking expeditions to have picnics, and they took satisfaction in what they harvested. Sister Anna Dodgson wrote in 1881 in a Mount Lebanon Church Family journal, “Nothing more important than a fine supply of blueberries now occupies our attention. Tho I might mention the currants.” In 1893, Brother Hamilton DeGraw of the Watervliet, New York, North Family wrote to the Manifesto, “We do not want to ‘count our chickens before they are hatched,’ but at present we feel safe in saying to our beloved Editor that if he will call around about melon time he will have the pleasure of sampling some choice varieties.”

The vegetable gardens were lauded as well. In 1893, Sister Emily Offord wrote, “So much rain has greatly [delayed] the season’s work; but, notwithstanding, our gardens are looking finely. Peas, onions, tomatoes, and other plants are growing vigorously. Every opportunity for outdoor work has been zealously improved by Sisters as well as Brethren, and it seems as though Nature was putting forth extra exertions to make up loss of time.” In the same issue of the Manifesto, the Shirley, Massachusetts Shakers reported, “Our gardens have been highly favored by the weather and are becoming useful as well as beautiful. The early product of the salad kind are finding their way to the kitchens and on to the dining rooms.”

The Shakers were permitted to travel for leisure when time and conditions permitted. A Mount Lebanon journal noted in August of 1882, “A new thing under the sun, 40 Shakers go on an excursion to Saratoga Springs.” In 1886, a group of seventeen Shakers from Mount Lebanon vacationed in Niagara Falls. The diarist, Eldress Augusta Stone, wrote, “[Benjamin Gates] chartered the hotel car, named Wanderer, belonged to Vanderbilt. The company occupy it [for] 5 days, have beautiful weather throughout the trip, and a very enjoyable time.”

Closer to home, the Mount Lebanon Shakers took frequent excursions to nearby Queechy Lake. In 1881, “Twenty-four of us [went] to Queechy Lake for a picnic, hire two boats, and run them steadily.” Similarly, in 1885, “A [group] of 27 Brethren and Sisters went to Queechy Lake and had a picnic and a good time generally, sailing, swinging, &c.” In 1899, Sister Genevieve DeGraw of the South Family wrote a more expansive description:

The ever-glorious Fourth proved a fair day. The elements conspired to [present] perfect weather. Fully appreciating the unseen efforts, a party from here, in company with our nearest neighbors, the Second family, celebrated the Fourth at Queechy Lake, in the town of Canaan. It is a beautiful, pacific lake, formed by nature and surrounded by pretty groves, with pretty cottages and a pavilion where ramblers can hide should a tempest and a storm arise. At 12 o’clock we were seated to a rich repast of the fruits of the orchard and garden. Reading, singing with speech-making and mirth generally ruled the dining hall of the rustic flag-draped shelter. Boat rowing and racing formed a merry feature of the day. Elder Ernest Pick with his Kodak took snap shots as we sailed away.

On another expedition, the Shakers characteristically adopted an improved method to make ice cream. Sister Daisy Wells wrote in 1895, “On the 20th of June a company of twenty, – including horses and carriages – enjoyed a pleasant day at Lake Queechy. Selecting one of the longest days with ‘not a ripple on the wave nor a cloud in the sky’ it was a full day of pleasure. Previous to starting we prepared in the ingredients for our ice cream and on arriving at the lake we found that the motion of the carriage during a three mile’s drive was just sufficient to produce our coveted delicacy without further trouble. Taking a pleasant ride with an ice cream freezer is quite an improvement on the usual turning of the crank.”