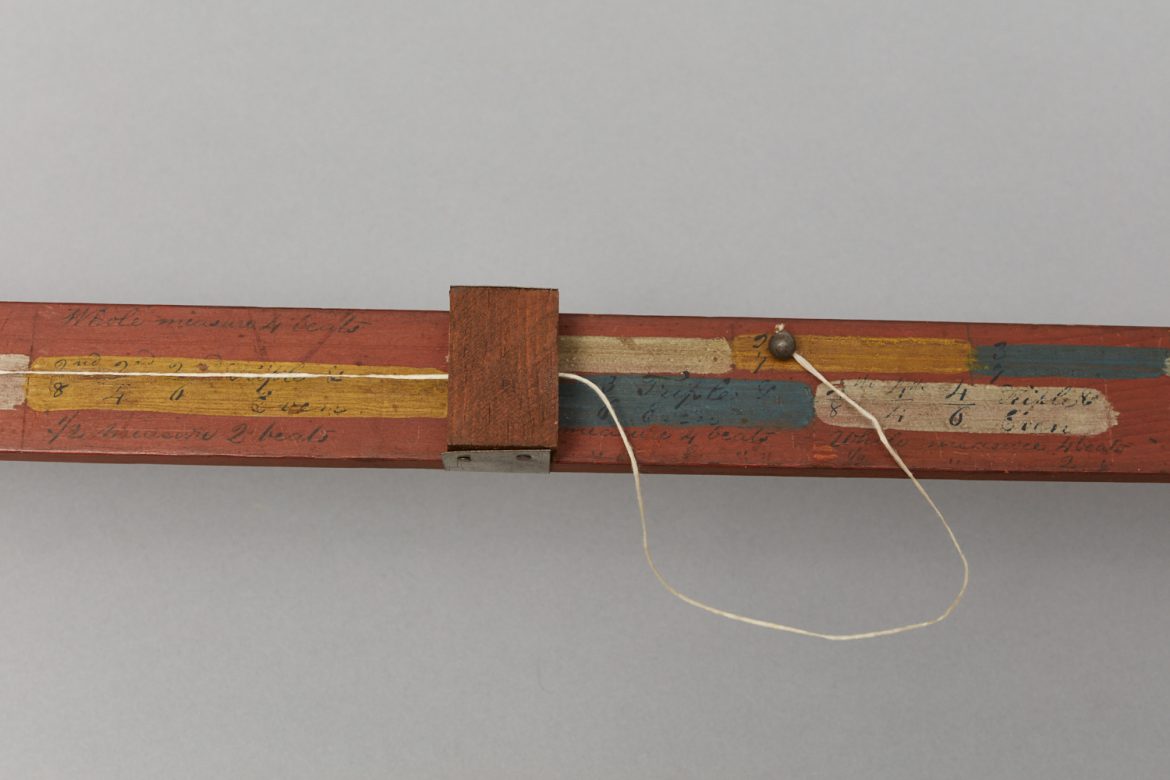 Instruments to keep the Shakers singing in union

There are few aspects of the Shaker experience that are more important than music. It was an essential part of their worship, expressing their beliefs and providing an underlying structure to their laboring in dance. The effort put into writing songs, whether a consciously constructed work or words and tunes revealed in spiritual vision, was immense – producing as […]

There are few aspects of the Shaker experience that are more important than music. It was an essential part of their worship, expressing their beliefs and providing an underlying structure to their laboring in dance. The effort put into writing songs, whether a consciously constructed work or words and tunes revealed in spiritual vision, was immense – producing as many as an estimated 25,000 songs. Many of these songs were written down in multiple copies to be shared among Shaker families and communities. For this, the Shakers developed a unique system of writing music using letters rather than the now-standard round-note, five-line music staff. Thousands of these songs survive today. By the 1820s several Shakers began developing systems for recording and teaching music. One of these Shakers, Brother Isaac Newton Youngs, a member of the Church Family at Mount Lebanon from his youth, worked diligently to provide both a system for writing music and provided solutions to the problem of how the Shakers could keep “in union” with each other in how they sang these songs. He proposed a way for all Shakers to know where on the music scale to begin a song and how fast to sing it.

Our colleagues at Hancock Shaker Village have mounted an exhibition this season about Shaker music, While Mighty Thunders Roll, that looks at both Shaker music and objects associated with their music. In this exhibition is an instrument from the Shaker Museum |Mount Lebanon collection: a monochord or toneometer the Shakers used to set the starting point for a song and which is attributed to Brother Isaac. It could be tuned to a standard tuning fork and then by altering the length of the sting with one’s finger provide the correct note on which the start a song. The note on which a song should be started could then be included in the written version of the song and Shakers everywhere were able to use such a tuning fork and such an instrument to all begin a song on the same note. This standardization allowed Shakers visiting from one community to another to feel “in union” with the brothers and sisters as they sang.

A second instrument, attributed to Brother Isaac, is also in the collection of Shaker Museum | Mount Lebanon. It is a metronome – called a speediometer by Brother Isaac – used to set the speed at which a song is sung.

The speediometer was made of two long pieces of wood that could belengthened or shortened and were held in place by a wooden thumbscrew that could be then adjusted to be held between a lower and upper surface in a plumb position. The speediometer employed a pendulum consisting of a string of variable length weighted with a lead ball and a sliding piece of wood that could be adjusted to hold the string at a given length. In 1843 Youngs wrote and printed a book, A Short Abridgment of The Rules of Music With Lessons For Exercise, and A few Observations; For new Beginners, in which he described the use of his device: “The learner should be provided with a speediometer to vibrate or swing once in a second. A bullet, attached to a smooth string, 39 1/2 inches long, from the point of suspension, to the center of the ball, will very nearly vibrate seconds.” Youngs also provided a “Table of Modes” (actually tempos and not modes) in which he named the tempos adagio, largo, allegro, and presto, and included the length at which the string should be set for each. The speediometer in the Museum’s collection is certainly one made by Youngs. The writing used to identify the calibration of the different “modes” is in his distinctive handwriting.  In addition, Youngs used the denominator “7” in time signatures representing pieces to be sung in 6/8 time, believing that there needed to be seven eighth notes per measure in this tempo to fit the natural rhythm of the voice and body. This notation, rejected by other Shaker music theorists, is used in calibration of the speediometer. The string, lead shot, and wood and tin-plate slide used to adjust the length of the string have been replaced.