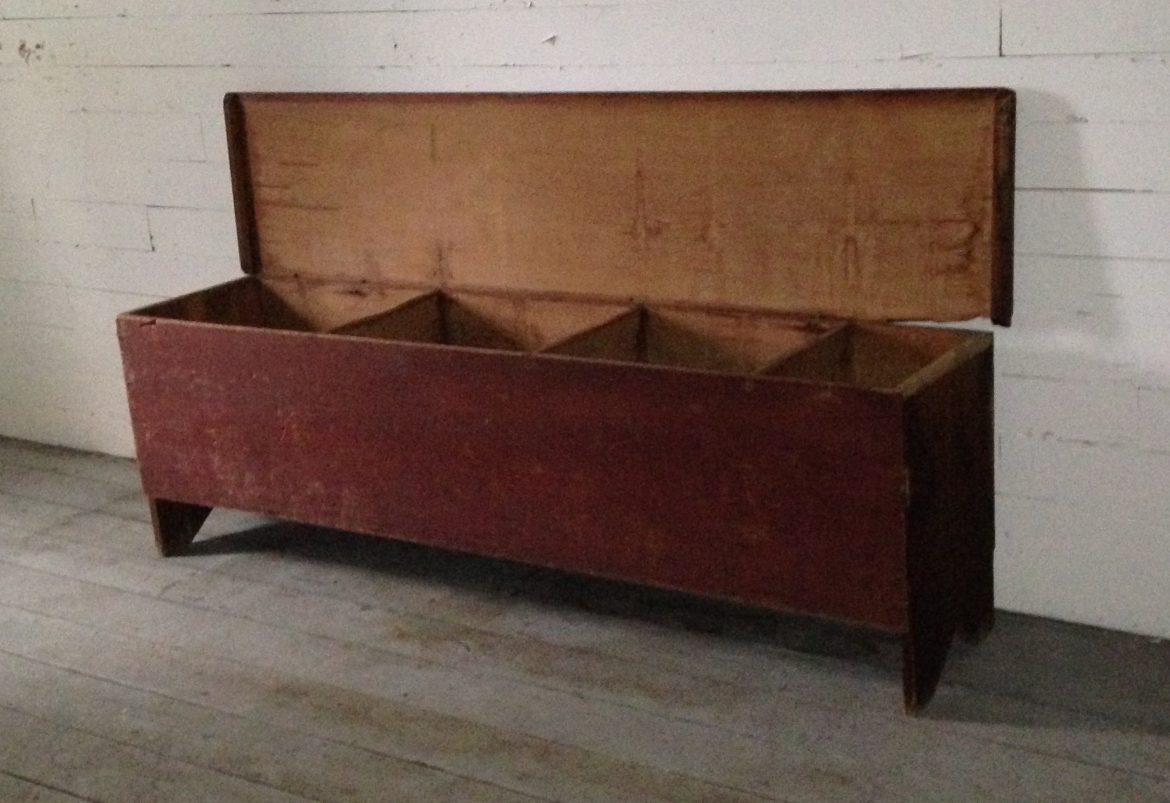 A curious feature leaves questions about a chest’s use

The chest was well made but had no obvious details in design or construction that would determine its Shaker origin. The only curious feature of the chest is hidden in the chest’s largest compartment.

Several months ago a Museum staff member was invited to take a look at a Shaker grain chest in a local collection. The owner of the chest had purchased it at auction where it was identified as being Shaker, but no particular Shaker community was associated with it. The grain bin is a basic six-board lift-top chest. The lid is made of a single wide pine board cut in two pieces to make it possible to lift one half of the lid at a time. The front, back, ends, and bottom are also single wide pine boards. Inside the chest are three dividers creating four separate compartments, one of which is considerably larger than the other three. The chest is 33 inches high, a little over six feet long, and a foot and a half deep. The interior of the chest is not painted and appears to have been used to store something like grain or flour. The chest was well made but had no obvious details in design or construction that would determine its Shaker origin. The only curious feature of the chest is hidden in the chest’s largest compartment. The divider of this compartment has a shallow rectangular recess located several inches from the top edge of the divider and centered between the front and back of the chest. The recess is about 3/8 of an inch deep, 2 1/2 inches long, and 3/4 of an inch high. Opposite this feature is a similar recess in the end board of the chest. It is similar in size and location but extends all the way to the top of the end board. While the purpose of these recesses is not known, it appears as if a board could be inserted into the rectangular recess in the divider, creating a solid but narrow platform the length of the large compartment. This feature is not present in the other three compartments.

The similar features in these chests beg the question of why they are there and how they were used. Is this feature unique to the Shakers or a common feature of grain (or apple) bins in the world at large? All are welcome to offer facts and opinions.