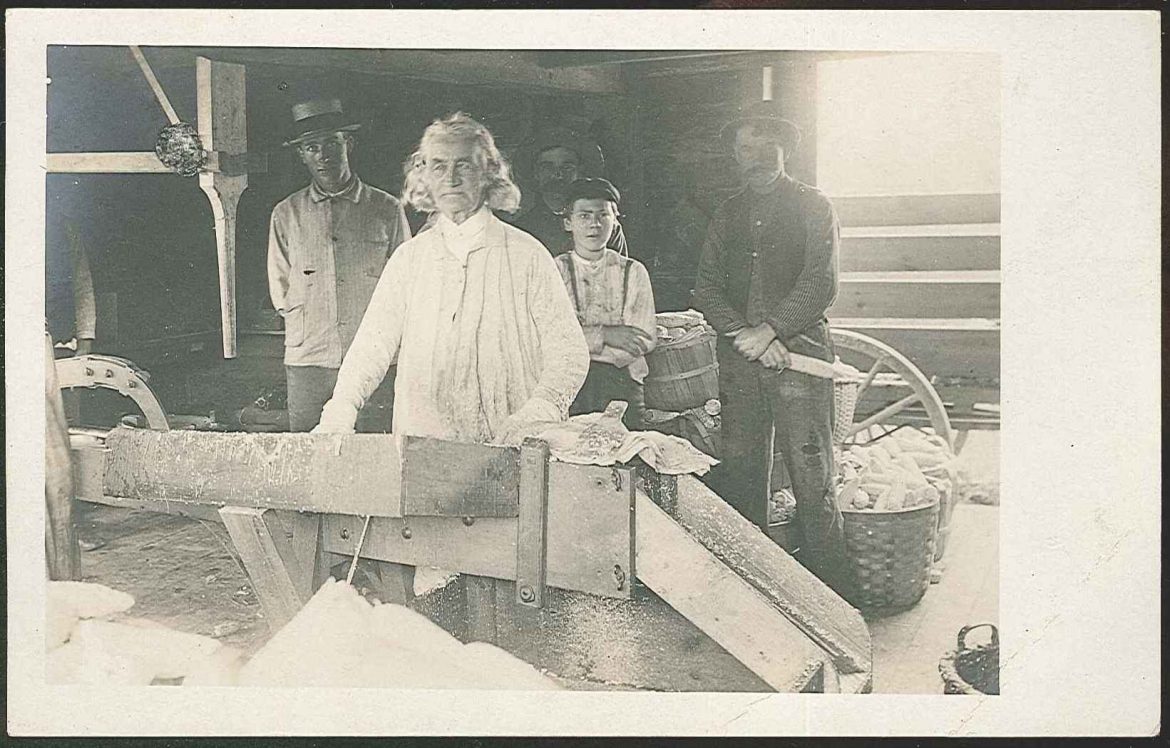 Shakers who were appointed as trustees for the Society were empowered to conduct business transactions such as the sale and purchase of goods and real estate. Some were more gifted in this work than others.

Shakers who were appointed as trustees for the Society were empowered to conduct business transactions such as the sale and purchase of goods and real estate. Some were more gifted in this work than others. Elder Richard Bushnell, of Mount Lebanon’s North Family, kept that family’s finances so carefully that his successor Elder Frederick W. Evans had the means to build the Great Stone Barn in 1859. Sister Emma J. Neale of the Church Family, Mount Lebanon, established an enormously successful cloak workshop and as a trustee helped the Church Family recover from poor financial decisions made by some of her predecessors. One of those unavailing predecessors was Brother Robert Valentine, whose real estate dealings in 1895 and 1896 caused him to be jailed in 1901.

Brother Robert was born in Brooklyn, NY in 1822, and came to live with the Shakers at Mount Lebanon at the age of 9. He may have been a natural relative of the Van Houten twins, Phoebe and Catherine, who were Church Family Shakers, but this has not been verified. By 1835, he was living at the Second Order of the Church Family (known as the Center Family), where he served as a deacon from 1845 until 1872. He managed farms owned by the Shakers, and had charge of the broom business; the Shaker Museum has two brooms in the collection bearing the label of Robert Valentine.

In 1878, he was named a trustee. He and his fellow trustee Brother Benjamin Gates conducted numerous business transactions, such as the purchase of bottles and other supplies for the medicinal herb industry; the negotiation of a right-of-way with the New York, Rutland, and Montreal Railway Company; and the purchase of investment properties. In 1895-1896, Brother Robert leased at least five buildings in New York City; an 1897 New York Times article noted, “His operations created much interest here.” Sister Emma J. Neale stated in a court testimony that she thought at the time, “The thing was done, and couldn’t be helped, and I hoped for the best.” It is not clear why he entered into the leases; he may have been duped by unscrupulous business partners, which was not an uncommon occurrence for the Shakers, or he may have been attempting to recoup losses from earlier unwise investments. He may also have planned to use the Shakers’ funds to acquire his own fortune and leave the Society. When asked in court whether he intended to remit profits from the ventures to the Shakers, he cryptically replied, “A portion of it.”

In any case, after only two months, he was dispossessed of the properties due to failure to pay the rents, and had purchased goods and services for the properties which he did not pay for. One of the latter was a debt to the Graves Elevator Company for $3,000 for the installation of an elevator. The company attempted to sue the Shaker Society to recoup the money, on the grounds that the covenant signed by Believers rendered the Society, and not its individual members, responsible for debts incurred. The company lost its suit and an appeal. In May of 1901, a business owner named August Ludemann sued Brother Robert for the return of $2,000 he’d paid for a lease on one of the properties. Brother Robert lost the suit, and was ordered to make restitution. Perhaps he failed to do so, or perhaps there were other acts of malfeasance, for he was jailed in New York City.

According to the New York Times, “When, in May, 1896, the operations were discovered, Mr. Valentine was severely criticized by his brethren, and finally, on June 4, 1896, retired from his Trusteeship.” Henry Clough, a former Shaker who had left to marry another former Shaker, Julia “Mintie” Dalton, but returned to work for the community, wrote a sympathetic letter to Brother Robert to tell him that the bond to “have the freedom of New York County” was $4,000, and that “My only wish is to do any thing I can in a quick way, without alarming our good friends at Mt. Lebanon, or giving any further publicity to your affairs here in town.” Journals in the Museum’s collection indicate that rank-and-file members responded charitably as well. Sister Corinne Bishop wrote, “Poor Robert V. went to gaol.” Brother Timothy Rayson wrote that at a worship meeting, “Great sympathy was expressed for R. Valentine who is in serious trouble.” Sister Cornelia French wrote, “This week a lawsuit has been held by the Supreme Court against Brother Robert Valentine for the sum of $2,000 that he borrowed of August Ludemann… Brother Robert was one of a company of men engaged in the [real estate] enterprise which has proved a failure.” Upon his release in May of 1902, she wrote euphemistically, “Brother Robert Valentine returns home. He has been absent since last November. Was detained in New York on law business.”

Brother Robert’s life appears to have been uneventful after his return. Brother Timothy Rayson’s journal records that he made many trips to Pittsfield. The purpose of these trips is unspecified, but it is hard to imagine he continued to be entrusted with conducting the Shakers’ business, even the sale of their goods. Brother Robert was photographed operating a corn cutting machine early in the 20th century; the image was printed on a postcard that was mailed to Henry Clough and his family in 1907.