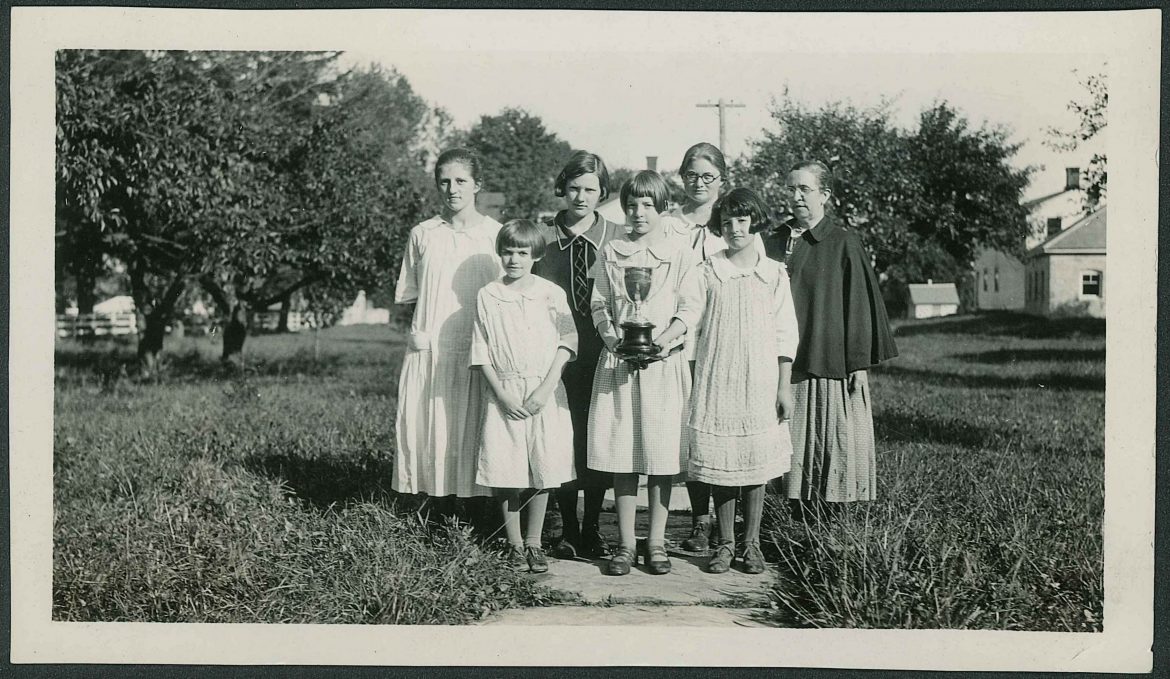 A loving cup school trophy in the Shaker Museum’s collection – along with a medal awarded at an agricultural fair in the 1870s for “Sisters’ Handiwork” and a blue ribbon won for livestock shown at a county fair – document that odd intersection between the outside world where prizes recognize accomplishments but also potentially feed pride and vanity – something the Shakers constantly struggled against.  The trophy awarded to the Hancock Shaker School is an odd survival, valued enough to be kept from the time when it was awarded to the Shakers in 1928 until it was acquired by the Museum in 1960.

The Shakers’ school at Hancock was designated a separate school district of the town of Hancock, Massachusetts in 1817 and continued to serve the boys and girls of that and the surrounding non-Shaker community until 1940 when the Shakers’ decision to no longer take in school-age children and a dearth of outside children rendered it unnecessary. The southern part of the Town of Hancock, where the Hancock Shakers and their school were located, is not easily accessible from the northern part of the town, due to several large mountains in the Taconic Range. One has to travel east through Pittsfield, Massachusetts or west through New York State to get from one part of town to the other. It was certainly a convenience for the town to have the Shakers care for the education of all children in the lower part of the town and to do so very well, as evidenced in an 1896 article in a local newspaper that noted, “In addition to the routine work usually found in such schools, is taught free-hand drawing and the children are given some practical instructions in botany, music, calisthenics, etc. … [and] are quite a little in advance of those in the city [of Pittsfield].”

The loving cup awarded to the Hancock School for three consecutive years – 1926, 1927, and 1928 attests to the fact that the school continued to maintain its good reputation over the years. Two photographs in an album of snapshots taken by an unidentified Shaker photographer around 1926 show that the Shakers did have some sense of pride in the quality of education provided for their children. One photograph is of the loving cup on a table with a carefully placed cloth placed behind it. It is said that sometimes in a daguerreotype the photographer’s image can be seen reflected in the eyes of the subject of the photograph. Likewise, in the reflection of the loving cup it is possible to see the photographer’s tripod and likely the dark cloth covering his or her head while the photograph was being made. The inscription of the cup reads, “Hancock Community Fair,” underneath which is engraved, “Shaker School 1926.” When acquired by the Museum the cup had two additional engraved inscriptions, “Shaker School 1927,” and “Shaker School 1928.” On the back of this photograph is written “Cup won by Shaker School at Hancock Fair 1926.” It is not clear if the Hancock Fair was a town event or a school event; the cup remained with the Shakers after it was awarded in 1928 and it seems likely that the fair either ceased to be held or the Shakers ceased participating in it. A second photograph taken on the stone walk that once ran from the east door of the Hancock Shakers’ brick dwelling house to the Trustees’ Office, shows a group of Shaker school girls with their teacher, Sister Elizabeth “Lizzie” Belden. The girl in the front center is holding the loving cup. Sister Elizabeth (1871-1944) taught the Shaker girls school at Hancock and was often caretaker of the girls from the last decade of the nineteenth century into the 1930s.

The Shaker Schoolhouse at Hancock served the community from around 1820 until the mid-1930s when, no longer needed, it was sold and moved several hundred yards away from its original location and used as a private residence. That building still stands as a residence and was replaced at Hancock Shaker Village by a carefully constructed replica in 1976. If the loving cup had been kept in the schoolhouse it would have been rescued and kept elsewhere until it was finally sold to the Museum.