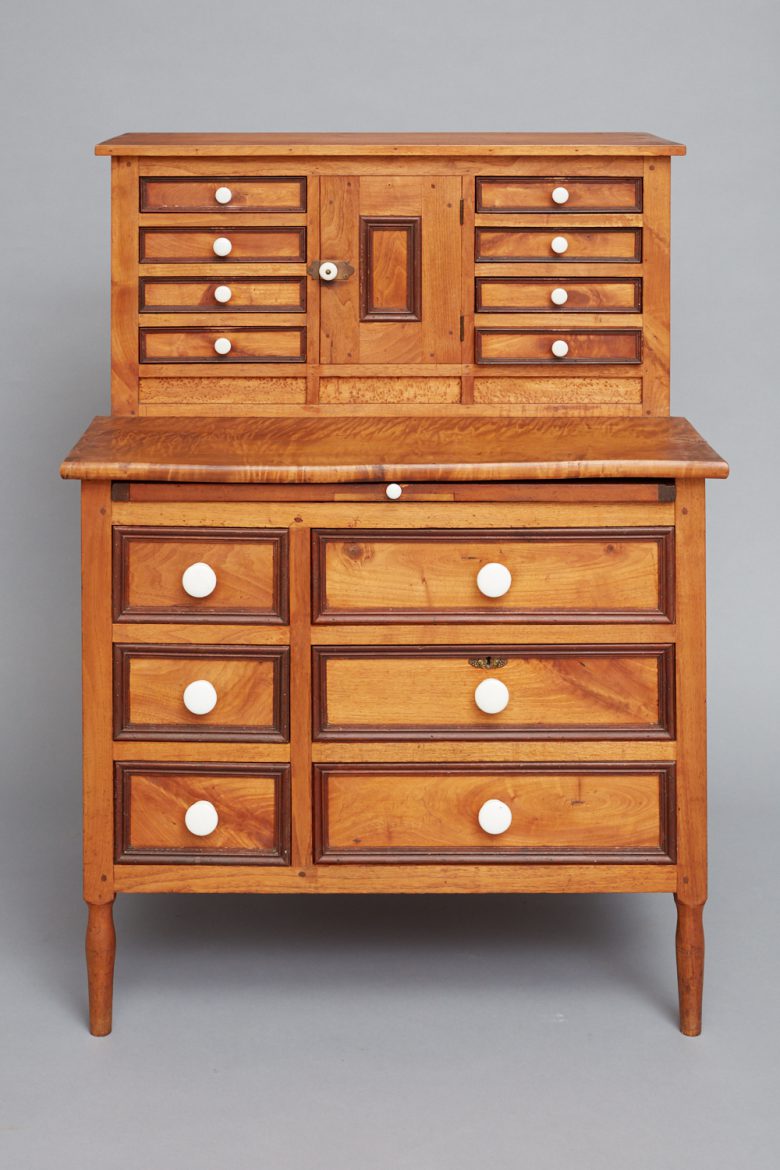 A sewing desk from a butternut springs

When doing an historic evaluation of something made by the Shakers, three questions are standard: Where was it made? When was it made? Who made it? The sewing desk discussed here provides answers to two of these questions. On the bottom of lowest right-hand drawer is written: “These two sewing desks were made from Mother Hannah’s Butternut trees […]

When doing an historic evaluation of something made by the Shakers, three questions are standard: Where was it made? When was it made? Who made it? The sewing desk discussed here provides answers to two of these questions. On the bottom of lowest right-hand drawer is written: “These two sewing desks were made from Mother Hannah’s Butternut trees grown South of Ministries Shop. Were cared for her when saplings. Desks made by Elder Henry C. Blinn.” Knowing this desk and its missing mate were made by Elder Henry, we also know they were made in the Church Family at Canterbury, New Hampshire, where, at 14 years old, he became a resident, remaining there until his death in 1905. Narrowing down the date the desk was made, however, is more challenging.

Sewing desks of this form – a case of drawers with a pull-out work surface and a gallery of small drawers for tools and odds and ends – became popular among the Shakers around 1860. They were made in a similar form in nearly every eastern Shaker community for the next three decades. Stylistically this piece seems to have been influenced by the increasing decorative elements of the Victorian Era – the use of a variety of decorative woods, applied walnut moldings, and white porcelain drawer pulls. Museum records and authors who have included the piece in their publications, however, have generally dated the piece around 1870, seemingly earlier than the style would dictate. One clue to the date that Elder Henry made the desk may lie in the inscription. If it can be determined when Mother Hannah’s butternut trees were cut down, that would supply a “no earlier than” date.

Mother Hannah Goodrich, born in 1752, was one of the original members of the Shaker Community in Hancock when it was gathered in 1790.  She was sent with Father Job Bishop to lead the newly formed community at Canterbury, New Hampshire in 1792. She remained there until her death in 1820. At some time, according to the inscription, she took some interest in cultivating butternut trees. The oily nuts from the butternut tree are edible. The trees can be tapped for syrup in the same manner as maple trees. The nut can be pressed for oil and parts of the tree are used medicinally. Most likely, Mother Hannah encouraged the cultivation of the trees to use the shells of their nuts for dying cloth. Butternut dyed cloth was very common in early Shaker clothing. Whatever the reason for growing them, the inscription establishes their historical significance among the Shakers. Elder Henry drew a map of his village titled, “Plan of Canterbury by Henry Blinn 1848.” On this map he includes the buildings, roads, walks, fields, orchards, and a few significant trees in the village. He depicts a row of trees along the main road by the family’s Office and the fir trees planted around the newly established outdoor feast ground – Pleasant Grove. Two trees, south and slightly east of the Ministry’s Workshop, appear to have some special significance as they were also included in the map. Could these have been Mother Hannah’s butternut trees?  They are south of the Ministry’s Workshop. Butternut trees are slow growing trees and rarely live to be more than seventy-five years old. Had Mother Hannah’s trees been saplings when she first came to Canterbury, they would probably have been harvested in the late 1860s, making lumber from the trees available to Elder Henry in the early 1870s, whereas had she planted and cared for them in the last few years of her life they probably would have been harvested in the late 1880s, pushing the date when their lumber was available to Elder Henry to around 1890.

Two photographs in the Shaker Museum | Mount Lebanon collection may help to unlock the mystery of when the trees were harvested – should the dates of the photographs be determined. Both photographs were by the Kimball studio in Concord, New Hampshire. Since photographers from that studio worked over a broad time period, that information is not particularly helpful in narrowing down the date. The first photograph shows the Canterbury Meetinghouse and the Ministry’s Workshop (then also its residence) with some Shakers, including Elder Henry himself, standing and sitting in the yard. Just behind the Ministry’s Workshop, the upper canopy of a tree can be seen. Again, could this be one or both of Mother Hannah’s butternut trees? A second photograph taken from the south looking across what Elder Henry called the “Meeting House Field,” one can see on the far right part of a tree that has a canopy similar to that of a butternut. Elder Henry located the two trees shown on his 1848 map on the south side of what appears to be either a fence or a lane bordering the northern side of the Meeting House Field. The tree shown in the second photograph also appears to be on the south side of a fence along that side of the field.

Elder Henry Clay Blinn was a very busy Shaker. In addition to serving in the Canterbury leadership he was a printer, the editor of the Manifesto, a dentist, a beekeeper, an author, a tinker, a teacher, and a tailor. It is not clear whether he did much cabinetmaking in his early years. In an addendum to his “Autobiographical Notes,” published in In Memoriam. Elder Henry C. Blinn, 1824-1905, the author mentions, “That he might have all the care needful in his decline, apartments at the Infirmary were kept at his disposal; though he was never better pleased than when able to spend the day at his carpenter’s bench, engaged in light cabinet work, a favorite occupation.” It may have been during these less busy days that he had time to do some “light cabinet work.”

Of course, even knowing the date that the trees were harvested does not date the making of the desks – the lumber may have been dried and stored for years or decades before it was used. Even knowing that none of this information provides a conclusive answer to the question of when Elder Henry would have had access to the lumber from Mother Hannah’s butternut trees, it has been an interesting investigation in using documentary evidence to try and answer the haunting question of “When was it made?” Of course, any information on dating the photographs, or the date that Mother Hannah’s trees were cut down, will be appreciated.