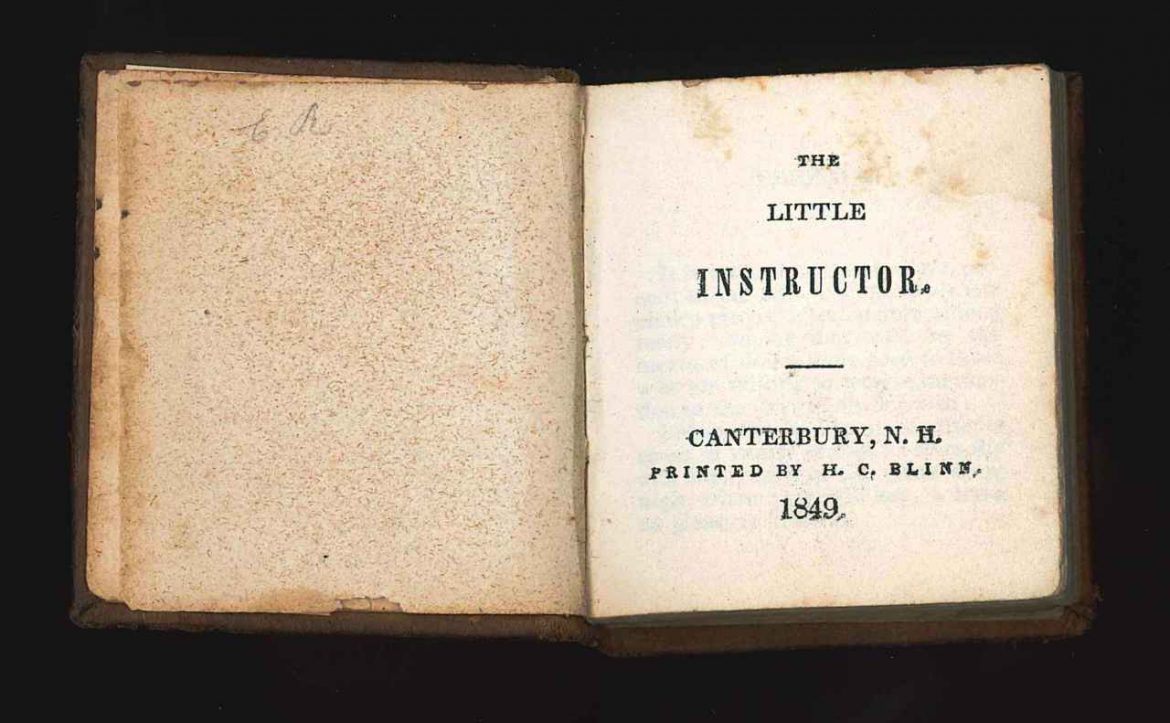 In the spring of 1849 Elder Henry Clay Blinn, the caretaker of the boys at the Church Family at Canterbury and beginning in 1843 the community’s printer, was given a manuscript to print. The book, The Divine Book of Holy and Eternal Wisdom, was dictated by an angel to Sister Paulina Bates at Watervliet, New York, and at […]

In the spring of 1849 Elder Henry Clay Blinn, the caretaker of the boys at the Church Family at Canterbury and beginning in 1843 the community’s printer, was given a manuscript to print. The book, The Divine Book of Holy and Eternal Wisdom, was dictated by an angel to Sister Paulina Bates at Watervliet, New York, and at nearly seven-hundred pages was the most ambitious printing project ever done by the Shakers. To accomplish this arduous job the community purchased a new printing press and a large quantity of new type. Elder Henry was released from his responsibilities with the boys and with ample help the work was completed the edition of 2,500 copies in six months. At the end of the work, Elder Henry returned to the care of the boys and to teaching school. This job gave him the knowledge and equipment to print about anything.

It appears that at this time, Elder Henry, fortified by this experience, took on a project that seems the polar opposite of the massive volume he had just completed. This book, a true miniature volume (2 1/8” x 1 7/8”, 128 pages) is titled, A Little Instructor. It was aimed at the youth of the community with his hope that, “these few choice pieces, … will be the means of doing some good to those who are willing to receive instruction in the days of their youth.” Elder Henry used the diminutive size of the book to make the point, surely appreciated by the youngsters, that “We should never despise any thing because it is small, without first making ourselves acquainted with its properties,” and that his readers should “feel assured that it is not the size that makes the value, and that little books, like little boys and gifts, sometimes contain much good sense.” The book begins with an “Address to Young persons” written by Hugh Blair (1718-1800) followed by a poem by David Bates (1809-1870) titled “Speak Gently.” Essays on a variety of moral topics by well-known writers such as Isaac Watts and Oliver Goldsmith are interspersed with articles of interest to youth on single celled animals, elephants, whirlpools, mocking birds, and the hippopotamus.

Elder Henry followed the printing of The Little Instructor with an even smaller book, Dew Drops of Wisdom, a collection of aphorisms – one for each day of the year – printed in 1852. That year Elder Henry was moved into the Elders Order at Canterbury and ceased for the rest of his days to have care of the boys.

While it may seem frivolous for Elder Henry to have printed books in miniature, in fact, by this date miniature books had become popular as a way to engage children in reading. In the collection of Shaker Museum | Mount Lebanon there are two other, non-Shaker miniature books. Both books have an association with Elder Henry in that they were part of the Canterbury Ministry’s library and one bears Elder Henry’s bookplate. One book, Gift of Piety; or, Divine Breathings, was published in Boston by G. W. Cottrell at an unknown date, and the other, The Golden Vase: A Miniature Gift, was published by J. M. Fletcher of Nashua, New Hampshire in 1851. Both books are similar in content and moral lessons to those delivered in The Little Instructor.